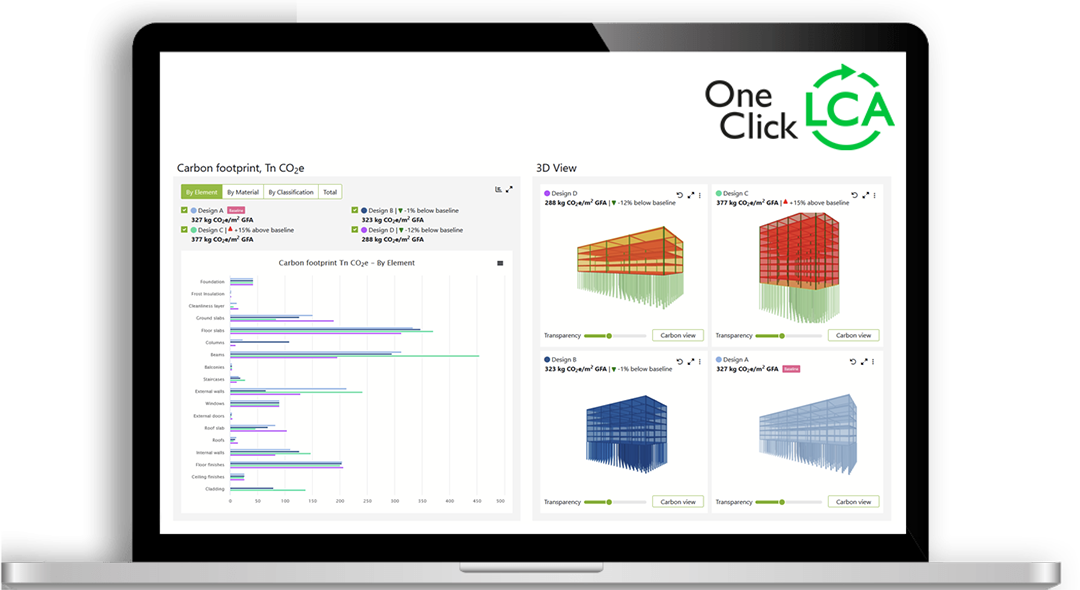 Carbon Designer 3D, launched this week by One Click LCA, allows non-experts to calculate and optimise embodied carbon in construction projects from the earliest project phases.

Carbon assessments are an essential part of today’s construction projects, and the earlier they are performed, the bigger the carbon and cost savings. Carbon Designer 3D, launched this week by One Click LCA, makes it possible to calculate and reduce carbon as early as briefing and strategy phases.

Carbon Designer 3D can quickly calculate a building’s carbon footprint based only on size and type of building. From there it is possible to visualize and compare the carbon performance of design alternatives and identify hotspots and reductions. This helps the right decisions to be made at the critical early project stages when opportunities to reduce impact are greatest.

Making carbon reduction understandable and accessible for all

Carbon Designer 3D does not require expert knowledge of life-cycle assessment (LCA) to assess and reduce carbon emissions. It uses powerful 3D visualisations to reveal carbon hotspots, making it easier to share findings with colleagues and clients to support buy-in.

The tool is compatible with a broad range of international methodologies, including the Level(s) method for the EU Taxonomy, LEED, BREEAM, and a host of embodied carbon regulations, such as France’s RE2020, the London Plan, and Sweden’s Klimatdeklaration.

Carbon Designer 3D is an evolution of Carbon Designer, a previous tool developed by One Click LCA with the Norwegian government in 2018. As well as advanced visualisations, Carbon Designer 3D includes a wealth of user experience enhancements to boost productivity. A key new feature is the ability to create and save custom design templates for use across an entire company in current and future projects.

“When we asked industry experts about the barriers to decarbonising construction, three quarters reported a lack of LCA skills. With Carbon Designer 3D, non-experts can make a significant difference by optimising embodied carbon at the earliest project stages for maximum carbon reductions.

Early phase carbon capability helps designers to get more work. Our data shows that companies with the precursor Carbon Designer tool worked on 75% more projects.  With the new capabilities to create and evaluate designs faster and more flexibly, we are confident Carbon Designer 3D will increase our users’ competitiveness even further”.

One Click LCA is a leading Life Cycle Assessment and Environmental Product Declaration (EPD) generation software for the construction industry. One Click LCA helps to decarbonize building and infrastructure projects, create product EPDs, benchmark low-carbon products, and projects, and to create corporate greenhouse gas reports. It is used in more than 130 countries, includes the world’s largest construction sector database, and supports over 60 standards and certifications.